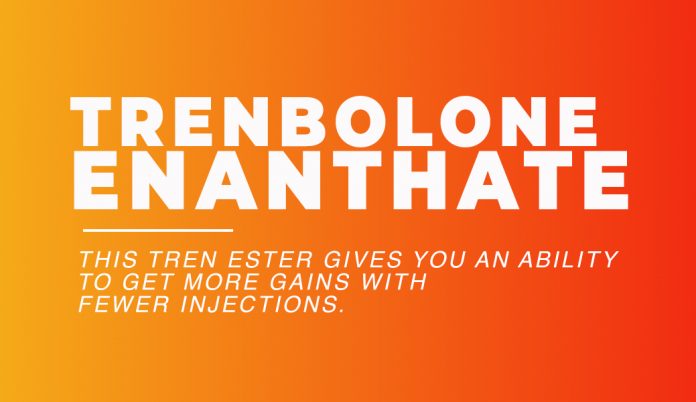 What Is Trenbolone Enanthate

To keep it simple, it’s a long-acting Trenbolone. It’s literally a Trenbolone molecule with an androgenic ester that doesn’t change the compound’s characteristics. Esterification just makes the absorption of the substance a little more challenging to your body and slows down the release after the administration.

Enanthate ester gives you a rapid release of the substance in the first couple of days and adds a period of steady and limited release in the next 4-5 days.

Enanthate ester form gives Trenbolone a half-life of about 7-8 days. You will need less frequent injections than you would with Trenbolone Acetate (aka Finaject), which has a half-life of just about two days. It’s not the only unique feature of Trenabol, though.

It’s a story about the compound that should’ve never been released.

In the 1960s, the laboratories that worked with steroids were obsessed with esters. The ability to control the release time was a fascinating new thing, so they experimented with all kinds of gear. Trenbolone was not an exception.

First, Trenbolone Enanthate was synthesized by a french laboratory Roussel-UCLAF in 1967. At the moment, they had no intentions to release it to the public and decided just to put it in the back burner. Roussel-UCLAF went bankrupt in 1997, so the result of their experiments was never supposed to see the light of day.

However, in 2004, about 37 years after the creation, a famous underground laboratory, British Dragon, released Trenbolone Enanthate to the market under the brand name Trenabol. We’ll never know whether they’ve got a call from ex-UCLAF’s guys or synthesized their own version, but it’s still available, and most importantly – it works.

In general, Trenabol has all the benefits of a hardcore gear you could dream about:

In addition to all the physical changes, Trenabol will alter your psychological mindset:

Oh, and don’t forget about the libido gains:

Where to Buy Trenbolone Enanthate

You can ask your own trusted source about it — chances are, they’ll have it. Another option is to buy Trenbolone Enanthate by Novo-Pharm in our shop. It’s lab-tested (meaning it is exactly what it says on the label, good-ol’ Tren, pure and dosed just right) so the great quality is guaranteed. We also can ship it to you anywhere in Canada.

Trenbolone Enanthate Before and After

Nope, we’re not going to show you dick size growth, sorry. Instead — this is what a typical Trenbolone Enanthate before and after progress pictures may look like:

Before you’ll say “not much!” — take a closer look at the details:

Now, this guy might be natural, he could’ve cycled a different compound, but this picture is here to be a realistic example. No, sorry, we won’t claim that these are the exact results you’ll get (there’s enough BS on the Internet).

Anabolic steroids won’t give you the Captain America kind of overnight gains, and they won’t turn you into The Rock in a week, even if you’ll train really hard.

Instead, they’ll give you notable (yet realistic) gains in a relatively short period, especially if you buy pharm-grade Apoxar Trenbolone Enanthate in our shop. That’s, like, the whole point.

How To Take Tren Enanthate

Thanks to the guys from British Dragon, it’s a regular injectable steroid. You don’t need to mess around with the cattle pellets like you would need to with Trenbolone Acetate.

The compound suggests intramuscular injection. As simple as it gets:

It’s an easy process that doesn’t deserve all the «inconvenience» buzz around it.

The most comfortable and painless injection site is your right buttock. The upper right corner of it, to be precise. However, any muscle that you can easily reach will do. Just don’t wiggle the needle around when it’s under your skin.

In the injection moment and a few seconds after it, you can start to cough.

So-called “Tren Cough” starts because your body is shocked by the number of androgens that enter your bloodstream. It’s not dangerous and it can’t turn chronic, so there’s no need to worry.

With a long ester, you CAN inject it just once a week. However, in that case, the spikes in side effects and non-stoppable cough in the first few moments after administration are guaranteed.

The weekly dose of Trenabol is around 300-800mg. It’s enough to give you the benefits, but not enough to crush you with side effects.

To make your life easier, you can break your weekly dose into two parts and take it twice a week: say, on Monday and Thursday.

I know that more frequent injections bear several risks. However, the benefits of this method are still more important:

It’s a compromise between injection frequency and effects, but not a strict recommendation. I’m not your supervisor, and you can do whatever you want. The half-life of Trenbolone Enanthate allows you to stick with just weekly injections and still get all the effects anyway.

No strict rules on this one. You can easily find a whole bunch of various stacks on the Web, and there’s a pretty good chance that they all will be useful.

I wouldn’t expect synergy between Trenabol and other gear since it has a powerful affinity to androgenic receptors. Those receptors (picture them like little gates or cabins) are limited in your cells, so other compounds will have to either fight for attachment or wait for their turn in the line.

Luckily the effect doesn’t really look like a fight – more as a busy line in front of a Gay club in San-Francisco on Saturday night. You will not lose a single minute of your cycle on Trenabol because it will immediately fill all available receptors. It won’t sit there forever, though, so other gear has all the chances to attach as well.

This effect makes Trenbolone a perfect stacking compound. To use all the benefits of the long Enanthate ester, I’d recommend sticking with long-acting gear as well. For example, a classic Trenbolone Enanthate and Testosterone Enanthate one:

Pay attention to the PCT phase. You should know that many athletes don’t even bother to wait and start PCT in just a few days after the last injection. This way, as they claim, Nolvadex or Clomid will gain enough power by the moment all your excessive steroids will leave your body.

I believe that PCT should be started on a clean body. However, you can try both options and stick with the more comfortable one.

For more information, here you can read our complete guide on PCT and PCT compounds, like Nolvadex or Clomid.

If you worry about feeling like shit after cycle with all the suppressed Testosterone (which you probably WILL feel, regardless of the PCT – remember that there is no free lunch in the gear world), I’d recommend giving HCG a try. It’s a hardcore life-saver for your balls and natural T levels.

Back to business with the stacks – I’ll give you a complicated one with all the supportives included, just to show how many of them you may need. Here is a stack of Trenabol, Testosterone Enanthate, and Masteron.

Just look at this enormous protocol. Here is how messed up it can get if you want the full insurance with your gear. The bad news here is that even an insane amount of supportives will (most likely) not save you entirely from all the side effects. You’ll have to counter them one by one.

Trenabol has all the perks of the monster compound in terms of side effects:

Trenbolone has a direct effect on your nervous system, and it’s a cruel thing. If you are prone to anxiety and have a generally negative thought process – welcome to hell. On high doses, athletes report literal panic attacks in public and severe paranoia. On the other side, if you are a short-tempered guy, you can become violent and aggressive on the cycle.

Basically, your whole personality gets a major boost in one or another direction. A good outcome is achievable, but only if you run the cycle with a positive mindset.

My personal approach here is simple: the more fucks you give about your mindset, the worse it will get.

In case you feel that you can’t bear it – don’t hesitate to drop the cycle. Trenbolone’s mental side effects can’t turn chronic, but your comfort is more important than your gains in just one cycle. For some athletes, the mental sides are truly horrible. No need to torture yourself. Just switch to other, less potent compounds, and let the effect go away. It will vanish in a few days.

Sounds good, but It’s vital to understand that it’s NOT YOUR NATURAL CONFIDENCE. It will vanish by the time the last microgram of Trenbolone will leave your body. Some anecdotal reports mention the feeling of a “Golden God” or Superman on Trenbolone.

There are stories about guys who left their almost finished university programs to follow a career in nuclear physics only to find out that they don’t understand shit in nuclear physics and were just overly-confident on Tren in the moment of decision. Needles to say, there was no way back for them.

DO NOT start big projects or make life-changing decisions on cycle – you will have to face the consequences of your actions when it ends.

You know that cliche scenes in cartoons when actors get a devil and an angel on their shoulders? Well, Trenbolone gives you a full choir of demons instead of just one. Especially if you’re naturally a short-tempered guy.

Some dude in the bar may just accidentally step on your shoe, and the choir of Trenbolone demons will start to yell «RIP HIS FUCKING GUTS OUT!», even though you know that it was not intentional and he already apologized.

Double-check all your actions while on Trenbolone, and don’t let the substance put you in jail. They mostly have shitty gym equipment in there.

Trenbolone in any ester is a single-player game of Russian Roulette with a Desert Eagle. You’ve got to have an armored skull to win at Round 1, and imagine the power you’ll need to survive Round 2.

With a longer ester, you have even fewer chances. In case something goes wrong, you can’t get rid of the effects quickly enough. It will stay in your body for about a week, with all the consequences.

However, the risk of getting an infection during the improper injection has always scared me way more than the possible side effects of the gear itself. It’s not THAT hard, but there’s always room for mistakes. Just one poorly disinfected needle can fuck you up and send you to the hospital.

Less frequent injections make Trenbolone Enanthate the most popular ester among experienced bodybuilders, and I can understand why. Trenbolone itself is a powerful, dangerous compound – no need to add more risks in the process.