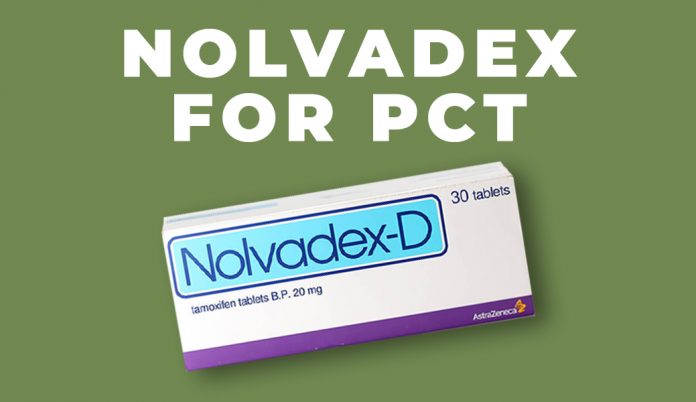 Nolvadex belongs to the class of selective androgenic receptor modulators. It’s deeply rooted in every athlete’s mind as “the thing you take to restore your testosterone”. It’s one of the most popular and one of the oldest PCT compounds available. Nolva has been around for over 50 years now, and its position on top of the supportive compounds list remains unchallenged. Let’s see how it works.

A bit of theory first. Selective Estrogen Receptors Modulators, such as Nolvadex, Clomid, or Raloxifene, are disguised to look like real female sex hormones to your body while causing zero harm. When the aromatization process kicks in, and your Testosterone starts converting to Estrogen. Nolvadex is medically proven by multiple studies to block Estrogen receptors, so you don’t experience side effects of hormonal misbalance. It’s crucial at the end of your cycle when the gear that you injected starts vanishing, and your testicles are not ready yet to produce Testosterone in a healthy amount. Nolvadex not only gives your body a necessary time to recover and get back on track but also bears some unique benefits.

You probably like breasts, but they look just weird with your ripped 6 pack ABS and gigantic arms, right?

Gyno is every athlete’s nightmare. On early stages, it manifests as just itchy nipples, but soon you notice that your areoles grow in diameter, and finally, in a few days – Bang! – you have a pair of solid moobs.

Nolvadex fights gynecomastia in breast tissue on all stages, so you don’t need to borrow your wife’s bra.

Nolvadex, being a SERM, works SELECTIVELY in your body. It blocks estrogen receptors almost everywhere but doesn’t negatively affect your liver. It has been proven to work as an estrogen agonist in the liver instead, and your liver actually needs Estrogen more than any other organ. This results in better liver values and a better balance of cholesterol. The effect comes especially handy after a cycle of 17-alpha-alkylated oral steroids, like Anavar, that are viciously toxic to your liver.

These are the two main positive effects of Nolvadex that set it apart from other similar compounds. To be honest, not much – but enough to make it stand out. Some recent studies though add new lines to the list. The following effects so far were reported only in mice, but human trials are already scheduled:

How To Take Nolvadex

The compound comes in pills. Do you need instruction on how to take pills? I believe you don’t.

The best time to take Nolvadex is before sleep, in an hour after your last meal, with plenty of water. If you decide to take it in the morning, get ready to experience a little blurred consciousness. Also, you have to take Nolvadex just once a day. The peak concentration of Tamoxifen in your blood comes in about 5 hours after you took the pill, and this moment should occur on your rest time. So, make sure you buy premium quality Nolvadex by Apoxar in our shop and start your PCT with no worries.

Nolvadex weans away from your body completely in 2 weeks – keep it in mind if you plan something that involves testing.

When To Start Nolvadex PCT

There’s a reason it’s called POST cycle therapy. Nolvadex PCT should be started when your organism is free of steroids. Otherwise, it just won’t be that effective. 2 weeks after the last pill or injection is the sweet spot for most athletes – it’s just as classic as Nolva itself.

There is no such thing as a universal dose of Nolvadex on PCT. Even though many protocols circulate online, the dosage always depends on the gear that you used, the duration of the cycle, and your natural testosterone level. The upper safe dose is 60mg per day, and the main risk here is the complete block of estrogen administration – you need it to function properly as a human being. Anything under that is OK if you have no specific allergic reaction to the compound.

How Much Nolvadex Do You Need

Now, here’s a simple guide for you to choose the right cycle duration and dosage. Just stop at some point when you understand that this is your case:

That’s the bare minimum that is typically a “female dose”. Nolvadex is originally a substance for cancer treatment in post-menopausal women. If you happen to be one, 20mg daily for 5 years is a therapy that’s proven to lower your risk of cancer by 17%. In any other case, as a female athlete, you don’t need Nolvadex at all. For male athletes, 5mg would not be enough for any purpose.

That’s the beginner’s dose that is widely used by athletes who just learn to go on gear. 4 weeks of 10mg Nolvadex every day is exactly what you need after a mild 4-6 weeks steroid cycle. There’s a huge chance that you don’t need Nolvadex at all in case it was mild enough not to get you suppressed, so get your blood checked beforehand and make a decision, whether you need to do PCT at this point at all.

Probably the most popular dosage among many athletes, regardless of their experience. It is the right dose to take after traditional Testosterone esters cycle, Trenbolon with Anavar or Winstrol. At this point, you can «play» with the duration of the PCT phase. Start at 4 weeks of 20mg Nolvadex every day and take it for 2 additional weeks if you think that you need it or tests give you lowered testosterone levels.

40mg would definitely be an overkill on mild cycles. However, if you just cycled some heavy gear, like Deca Durabolin or Anadrol – your testicles crave support, and your Estrogen levels are through the roof. In this case, you can take Nolvadex in 40mg dose every day AND add 2 more weeks of 20mg daily, just to be sure.

You can do both the Nolvadex solo PCT course and mix it with other compounds for your recovery. Before starting the Nolvadex course, you can do a couple of HCG injections to get your testicles ready for work in the most severe cases. Or stack Nolvadex with Proviron to boost your sex drive during PCT.

Even though Nolvadex is famous for being almost non-toxic, side effect free compound, by both multiple generations of athletes and medical trials, there are things that you should be aware of. Side effects of Tamoxifen are dose-dependent, so your experience is mostly dominated by the amount of the drug that you take. You will hardly notice any sides on the 10-20mg daily dose, but anything extra will probably give some unwelcome surprises. Here they are and how to counter them.

Insulin-like Growth Factor-1 is a hormone that takes part in your muscle growth. In short, the higher IGF-1 levels you have – the more gains you can keep. That’s definitely not the only one and not the most important factor for building up muscle mass, but it has to be taken to account.

That’s why a decrease in IGF-1 levels is considered to be a negative side effect. Drops to single digits are rare and Nolvadex by itself can’t strip you from all the gains, but with extra control, you can avoid even slightest consequences of its effect on IGF-1. Here is what you have to do to:

Mostly reported on 40mg per day protocol, this effect has certainly made some people seek an unnecessary appointment to the ophthalmologist. Along with temporarily decreased eyesight, you can get the weird effect some people call «floaters».

Weird formless transparent things that you normally notice with the side vision on a bright day. Yes, the ones you can’t focus on. after high doses of Nolvadex, they appear more often and in greater amounts, especially in the morning.

The effect was thoroughly studied multiple times, and hopefully, «floaters» typically disappear by week 2 of the Nolvadex course.

Nolvadex can turn your sex life into a rollercoaster ride.

To counter the suppressed libido in the first week or two, take some Cialis or Viagra. In addition to rock-hard erections when you need it, these compounds will give your post-cycle bulked body an even better pumping effect.

Tamoxifen is a Generation 1 SERM, brought to the market in 1977. Generation 2 Raloxifene and Generation 3 Bazedoxifene, last introduced in 2013, make Nolvadex literally the grandmother of PCT. It will give you all the care you need, time to relax and recover from a hardcore cycle. And most importantly, it won’t laugh at your man boobs if you accidentally develop them. Nolvadex is definitely worth a try. At least to understand why is it still one of the most popular PCT compounds there are. And if you were wondering where to get one, here is your answer — buy Nolvadex by NovoPharm and rest assure to recover even from the most challenging cycle.

Moobs No More: How to Act When You Have Gynecomastia from Steroids

Steroid Side Effects During Cycle – 5 Best Compounds To Counter Them