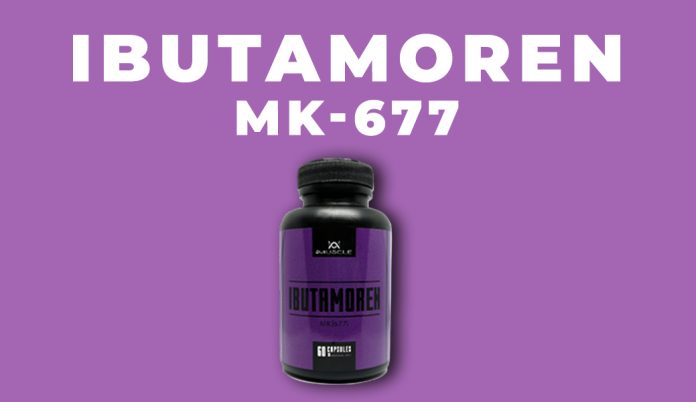 Somehow, in public opinion, MK-677 ended up on the SARMs list, and no one knows why. Because the market name sounds SARMish? Because it’s also relatively new? Because it works excellent in stacks with SARMs? It does not really matter. You can put MK-677 even in your grocery list, between eggs and chicken breasts – it STILL will give you fantastic results.

First things first, I’ll tell you what the substance is NOT:

At the same time, MK-677 resembles other existing classes of performance enhancement compounds. Here is a list of traits that you won’t see in any other substance:

Now, finally – what on earth is MK-677, and how can it combine all these benefits?

In short, MK-677 is a Growth Hormone secretagogue. It boosts the release of your natural somatotropin. Practically, to cause all the effects you need, it binds to your natural hormone Ghrelin. The little guy is responsible for all your ruined diets: Ghrelin directly affects your hunger. Besides, it partly defines your metabolism in general AND Growth Hormone production. Here is how MK-677 makes it a part of your performance enhancement:

So far, it sounds like a peptide, right? To be precise, a GHRH-group peptide. I know that it’s tempting to proclaim them the same, but it’s completely wrong. It gets way clearer in medical terms: MK-677 is a «nonpeptide» substance or a «peptide-mimetic».

MK-677 does not belong to the GHRH group of peptides. It IS the GHRH that peptides of this group try to mimic.

We can talk about how the MK-677 mechanism of action is more similar to the GHRP-group of peptides (even though it does not belong to it either), but you can read more on the subject yourself in our complete guide to peptides and their effects.

Now, to the best part of it.

Since it’s a Growth Hormone Release secretagogue, all the benefits come from the GH itself. For the full picture, you can read our guide on Human Growth Hormone. I’ll just give you a quick reminder. First, Growth Hormone alone can make your workouts more effective. By the moment, it’s basically a piece of common knowledge. Here is a nice collection of studies to prove this point, made by Harvard. So far, we know, that the Growth Hormone:

In addition, it has several anti-aging effects. That’s why extra-rich Hollywood A-listers sing praises to it:

Other benefits that will affect your performance indirectly, but still will improve your life in general, come in the same package. Mk-677 and elevated Growth Hormone also:

Besides, some of the Growth Hormone effects are mediated through the IGF-1. Here is what your natural Insulin-like Growth Factor-1 does:

The best thing about MK-677 is not what it CAN do. It’s clear that it can give you significant gains and improve your life in numerous ways. The best part is what it will not do and will not require YOU to do to get all the benefits. Here are the benefits of the stand-alone position of MK-677:

Oh, and this one is in loving memory of my wallet size a few years ago. It’s just great that MK-677 is not the real Human Growth Hormone because:

MK-677 is oral, and it comes in pills. You know how to take pills, don’t you? I won’t disrespect you with a 10-steps instruction on the process, so let’s get right into the details.

The best time to take MK-677 is in 1-2 hours before sleep. This way, you will avoid some of the side effects. I’ll give you more details about them later.

How Often Should You Take MK-677

The half-life of MK-677 is 24 hours. At that time, it will give you 10-12 Growth Hormone «bursts». Depending on your targets and experience, you can take it in any existing protocol: 2 days on – 2 days off, 3-3, etc. However, since it’s not one of those dangerously powerful substances that you need to limit, there’s no need for mid-cycle rest periods. Most athletes take a single dose every day. To smooth the GH release and side effects, you can take it in 2 administrations – the same dose, but cut in equal halves.

That’s a tricky question. We have studies like this one that suggest that in 6 weeks, the effect wears off. And we have major-scale studies, like another one here, in which participants were given a dose of MG-677 daily for two whole damn years, and had the continuously improving results. Athletes are divided on the topic s well: some run it in traditional cycles of 6-12 weeks in maximum dosage; others use MK-677 almost like a full-scale prolonged TRT, for several years non-stop, with only occasional month-or-two off. In anecdotal reports, both point out multiple benefits.

Which protocol is better? No one will ever tell you. Both seem to work, and we have not enough scientific research to back (or criticize) any of these two approaches.

Which one would I recommend? As usual, something in between. A month or two on MK-677 will NOT cause anything harmful to your body, and there’s a huge chance that some of the side effects will disappear by week 4 (yes, I’m talking about the hunger). However, in that case, I would also recommend the 5-2 protocol. We, unfortunately, have no scientific data to prove it, but anecdotal experience praises it as the best option for prolonged cycles.

You have a little gap between 10 and 25mg every day. Both are completely safe, but 10mg is believed to be a beginner’s dose. And we’re talking about «I’m in an existential dread because of sheer possibility of side effects» type of beginner.

You can start with 10mg per day, but switch to a more significant dose when you are sure that your body reacts well to the compound. In most cases, 10mg for the whole cycle would be plain insufficient.

That’s the only direct recommendation, though – I won’t give you any guidance on the exact dosage for two simple reasons:

A grain of salt for you: MK-677 is ALMOST side effects-free. Not completely. It can’t give you moobs and can’t send you to a hospital, but some of the unpleasant effects are guaranteed. Here they are:

It occurs every single time to some degree, simply because MK-677 is affecting Ghrelin (the hormone of hunger). You can’t escape The Hunger on it. Remember that time you missed your lunch and felt like you «could eat an ox»? Well, this is NOTHING compared to MK-677-boosted-mega-hunger you’re going to face. Yes, it’s THAT bad. Some people drop the compound solely because they can’t stand the hunger it causes.

Hunger is exactly what makes MK-677 an unlikely option for cutting cycles. Dieting is hard by itself, and MK-677 can turn it into torture.

Take the pill before sleep. This way, you can literally sleep through hunger. Some athletes recommend not to do it because you can mess up your sleep cycles. However, I’m a strong advocate of this approach. The Hunger is just way worse than mildly-less-fresh head in the morning. Besides, MK-677 on itself is known to make your sleep better, so you don’t get any real discomfort.

You don’t feel “like shit, but it’s dangerously close. MK-677 can drain you of the energy. The effect is most notable if you take it in the morning. A couple of pills after breakfast, and consider your day ruined. You don’t want to go to the gym. You don’t want to work out. You have to get all your willpower and break through this potato state to get anything done. Luckily, the effect is less notable if you take your dose before sleep, and it occurs not 100% of the time.

Another reason to use MK-677 for bulking is so-called edema. Your body builds up water and doesn’t want to get rid of it. You can gain full 10 Lbs of pure liquid and get bloated like a balloon, as some anecdotal reports note. Probably, not what you want on cutting, especially when half of your willpower is dedicated to fighting hunger.

You can’t get rid of the effect entirely, but you can decrease it. Here are the tips that work on any «wet» compounds:

That’s pretty much all you can get. Yes, all of the side effects can cause serious discomfort, but none of them are fatal or dangerous for your health.

I prefer to take it as an additional willpower test: if you can stand the hunger and laziness MK-677 triggers, you deserve all the significant effects and muscle gains it can give you.

Since most people turn to SARMs and other non-steroidal options (like MK-677) exactly because they don’t want to deal with anabolic steroids and classic gear, I’ll give you the SARMs stack options first. The list of the best possible options is relatively short, but each of them is ultimate:

All of them are bulkers because I’d recommend using MK-677 for bulking only – this is where it shines best.

The duration of the cycle is defined by the full duration of THE SECOND compound. For RAD-140, for example, it would be six weeks.

The dosage is defined by a general rule «close to the maximum, but slightly less for both compounds». However, you can find your sweet spot – whatever makes you happy and doesn’t mean abusing the compound. Here is how the protocols for the most popular stacks should look like:

As you can see, it’s not THAT hard. You can adjust it to your comfort: drop MK-677 at the same time that you drop SARMs, or keep going on it for a month or two.

MK-677 does not require PCT by itself, but stacks with powerful SARMs make it mandatory! Here is our complete guide on Post-Cycle Therapy, you can get all the details you need there.

MK-677 does not affect your sex hormones at all, and anabolic steroids don’t affect your growth hormone. Two kinds of compounds will act in completely different areas. Your steroids won’t even «notice» Mk-677 like it’s in a parallel universe. The pros of this are easy:

The only disadvantage is that you will not get any synergy between MK-677 and anabolic steroids from your main stack, and you probably won’t notice MK-677 effects in muscle gains and strength boost, since most injectable steroids are more powerful.

In short, «to stack or not to stack» is all up to you. In case you will decide to add some anabolic boosters to your MK-677 cycle, follow the tips:

In our ultimate guide on Anabolic Steroids, you can get more options for a stack with MK-677. Just make sure that you don’t waste the compound and feel its benefits even with more powerful gear.

Despite all the controversies, with MK-677, we can be sure about just one thing: it gets shit done. WHAT shit – depends on your targets and ability to use the compound right. There are a hundred ways to waste its effects and just a few genuinely beneficial protocols. Some of them are easy – even a complete bodybuilding neophyte can take a couple of pills a day before sleep. Others, however, require some experience under your belt and understanding of the basics. You know, not to ruin your cutting period with extreme hunger and water retention, or not to «drown» the anabolic effect of MK-677 in the same effect of a more potent gear. In case you know your needs and targets clearly, MK-677 is here for you.