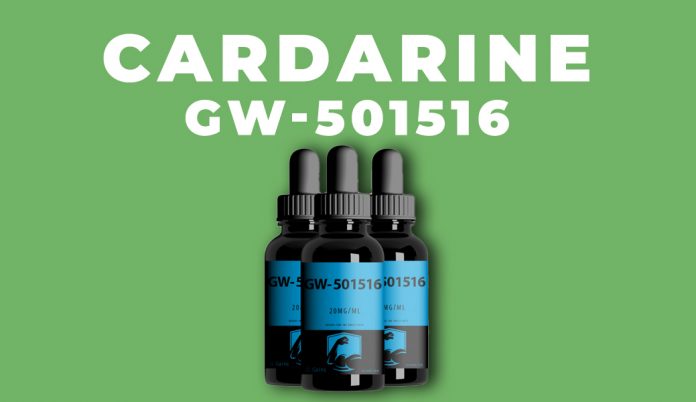 Cardarine GW-501516, also known as Endurobol, stands to its name. It’s a compound that can turn you into an unstoppable workout machine with no need for rest. Even though it was brought to the world by a famous SARM manufacturer, Ligand Pharmaceuticals, Cardarine is not technically a SARM.

Now, if you have time and want to know how exactly Cardarine affects your body – read the part on PPARδ, it will explain the thing. However, if you’re here for more practical details, you don’t need to understand all the weird medical stuff behind the compound’s action, so you can rightfully skip it.

What Is PPARδ and Why Do You Need It

Let’s deal with it term-by-term:
PPAR means Peroxisome proliferator-activated receptor. In other words, it’s “a receptor that is activated by peroxisome proliferator”.
Peroxisome itself is just another part of your cell (like mitochondria, the powerhouse of the cell, that you probably remember from school).
So PPAR, in basic terms, is just a receptor, and that’s it. It works LIKE the androgenic receptor, sits in the same cell nucleus, but affects a different set of functions.
You have 3 PPARs: Alfa, Gamma, and – the one we need now – Delta.
Naturally, you activate PPARδ by exercising. It reacts to physical activity and (if we simplify the thing) boosts your oxidation and fat-burning capabilities. In more humane terms, it gives you extra endurance.
Cardarine is a PPARδ agonist. We can roughly translate the term as “activator”. Practically, with Cardarine, you don’t need to exercise and run to your limits to get the second breath. However, if you exercise on Cardarine, you get both the natural “activation” and the gear-induced one.

Back in 1992, when Cardarine was developed, it was meant only for people with cholesterol issues. Nowadays, in the bodybuilding community, we have two primary uses for the compound: Cholesterol Issues and endurance boost.

You have two kinds of cholesterol, the good one – called HDL, and the bad one, LDL. Naturally, HDL and LDL are balanced. However, almost all anabolic steroids trash your cholesterol levels. Your «bad» LDL skyrockets, your «good» HDL goes down, and you get the whole bucket of unpleasant cardiovascular side effects.

Cardarine does the exact opposite: it boosts your natural «good» cholesterol and keeps the «bad» one under control. The effect has been proven in medical studies. Practically, It means that you:

Most athletes take Cardarine as the last resort measure, for the times when your cholesterol is absolutely destroyed. It’s a life-saver in situations like that. Oh, and that’s the only thing that we know for sure – thanks to studies on humans, like this one.

This is exactly why one of the Cardarine-based compounds is on the market as «Endurobol» and exactly why it has been dubbed as «the second breath in a pill». PPAR-Delta activation leads to faster oxidation processes. In other terms, your body switches from «Ok, we have enough energy for this» to «Shit, shit, shit! Faster! I have to look for God damn fuel, now!» mode and lets you:

The best thing about it is that you will get extra endurance, even if you will sit on a couch all day. However, if you get up, go to the gym and sweat your ass off, you will get the double endurance boost – both from natural PPAR-Delta stimulation and Cardarine. It means that your so-called «second breath» will be way, way more effective, and your «first breath» will last significantly longer. Be sure to try to push your limits on Cardarine, and you’ll be surprised when «just one more rep» will turn into «the fuck you mean I can do 10 more?!».

In anecdotal reports, many athletes mention the extreme need for self-discipline. It’s hard to stand an urge to push the limits and do twice as much as you would naturally.

Unlimited exercising may lead to overtraining and even traumas. Be sure to stay reasonable, even when you feel that you can do 100 more reps.

The compound “rewires” your body to use fatty acids as fuel instead of glucose. Both compounds directly affect your fat tissue production speed. As a result of Cardarine action, you get less fat – and more energy. If it is not a win-win situation, I don’t know what is. Besides, as it’s been proven in this study, Cardarine affects your insulin resistance, which also contributes to fat loss.

Boosted endurance gives you more time for cardio. You can burn more calories in one workout, and therefore – lose more fat. It’s an oversimplified version of the process, but whatever medical terms we would use, the core principle stays the same: the more calories you burn – the more fat you lose. Cardarine gives you the desired ability to burn more.

Boo-hoo, you see no gains on the benefits list, and you’re disappointed? Well, not every kind of gear is meant to make you big. No one will care about your biceps and massive shoulders if you will be in a hospital because of LDL clogs all over your veins. And no one will care about your gains, that will be hidden under 36% body fat because you eat a ton of junk stuff daily and run out of breath on the treadmill in seconds.

Cardarine won’t give you anything extra in terms of gains. It will give you an ability to push your workouts to new limits, make your muscle more visible with prolonged workouts, and, at the same time – will reduce the risk of a heart attack.

How To Take Cardarine

It’s oral, it comes in pills, and it does not react to food. With a half-life of 24 hours, you don’t really need any complicated protocol. Just take the dose in a few hours before the workout (for some athletes, the best timing is 4 hours; for others, it’s just 1 hour, you have to experiment with it) and enjoy the effects.

10-20mg per day. Not more, not less. Some athletes take it in higher dosages, but since we have no real image of the side effects – I would recommend staying in these frames and find your sweet spot. Note that for a stack, you have to lower the dosage of each substance – including Cardarine.

We’re talking about substance with unique capabilities, so it can add effectiveness to any other compound. It does not matter whether you’re bulking or cutting – extra endurance always comes handy. You have to keep in mind that it won’t create any real synergetic effect with other SARMs (since it’s not even a SARM).

Even though you can use it with pretty much everything, I would recommend sticking to cutting cycles – this is simply where it shines best. One of the most popular cutting SARMs options is Cardarine and Ostarine mix. Both are powerful «fat melters», and both can give you excellent results in a short cycle of 6-8 weeks. Here is how the protocol should look like:

It would be best if you had BOTH PCT and 4-6 weeks without gear, even after a mild cycle like this one. That’s why Nolvadex is on the list.

Another popular stack for cutting is Cardarine, Ostarine, and Stenabolic (SR-9009). The last one is also an endurance booster, but it works differently – by increasing the mitochondria size in your cells. It does not intervene in Cardarine effects, and you get 2X boosted endurance as a result. Here is your protocol for the cycle:

With any other kind of gear, you add Cardarine as a supportive compound, in the same mild dose of 10-20mg every day.

It’s best good to try every compound of your stack in a solo cycle first. This way, you will know which compound causes the side effects, and won’t have to play a game of chance.

Since the laboratory abandoned the compound, we don’t have any official list of possible side effects. According to anecdotal reviews, Cardarine is generally well-tolerated by humans. Some athletes say that it’s utterly side effects-free, and others note just mild inconveniences. Here is what you can expect:

As you can see, the list is truly short and mild.

I just have to mention another tiny, minor detail: Cardarine can give you cancer.

Yes, the one that kills people. Sounds fucked up, I know. Now you probably wonder, why didn’t I write «CANCER ALERT» instead of the whole guide? The situation is complicated, to say the least, and I wrote CAN instead of WILL for a reason.

Bodybuilding forums are genuinely full of «Cardarine and cancer» buzz. Rarely discussions look at least relatively competent. Most of the arguments are like

Did anyone mention that Jeff worked on a nuclear submarine and lived in Nevada, next to the army test site? Nope. And did anyone mention that the second guy bought a fake compound anyway? Nope again. We can’t rely on anecdotal experience in this question. So here is a complete review of the problem, based on the real medical data we have by now. In loving memory of Jeff:

First of all, there is no smoke without fire. Cardarine was found to really promote cancer development. We have two studies:

These two studies caused all the panic. And this is where things get weird:

Later, other specialists even tried to write open letters in defense of Cardarine and PPAR-Delta receptor agonist compounds, saying that the cancer panic had left them without the potentially effective drug.

Typically, we would run to scientists for a definitive answer. Unfortunately, this time it’s not an option – the professional community is in the middle of a shitstorm around Cardarine and cancer development as well:

So, can Cardarine give you cancer, or not? I can put my hand on the Bible and honestly say: I have no fucking idea. Just like the whole medical community.

The worst part of it – we will never know for sure. Ligand Pharmaceuticals decided to drop the research, and the most recent trials were terminated.

Cardarine might be one of the best substances for endurance improvement and crashed lipids restoration, but its reputation is destroyed with the cancer scandal. It is NOT a trustworthy gear anymore. I believe that it was just more comfortable for the company to abandon it in the very beginning. Additional research would cost a ton of money with uncertain chances for a positive result, and profits were not promising enough. Nowadays, the designer of Cardarine works on a new version of the compound – the one that is supposed to be safe. Will you wait, or will you take the risk – is all up to you.

I can only recommend comparing all pros and cons. If you’re an athlete with a huge need for extra endurance – say, cyclist, marathon runner, or Cross-fit enthusiast – it could be worth it. If you desperately need to lose weight and want to be shredded, no matter what – you can go for it. However, even in these situations – think twice. Just like you have to do with any other kind of gear.