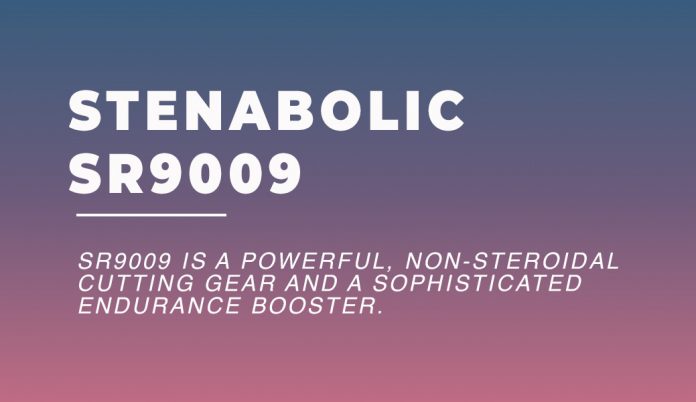 Stenabolic SR9009 was never approved for human use. It’s an experimental compound. All the studies we have were conducted on mice. Of course, it never stopped the most dedicated athletes from trying it. That’s how we know that SR9009 is a powerful, non-steroidal cutting gear and a sophisticated endurance booster. To get the effects, you will have to deal with low bioavailability. But first – this is how it works.

Stenabolic is not actually a SARM. Technically, it’s a REV-ERB agonist. If this abbreviation didn’t explain anything, we’ll start from the basics.

All your natural processes are defined by a biological clock, called the circadian rhythm. It’s linked to the sun circulation around the Earth. With it, your body can tell what time it is and release certain hormones.

If you mostly sleep in the daytime and stay awake in the night – you probably feel like shit, and your circadian rhythm is to blame. You can’t fool it without external help.

The process acts in a 24-hours loop and resets every day. Several genes are responsible for it, but now you need to know just one: BMAL1. It is, basically, the OFF button of your circadian rhythm. The only thing in your body that can push it is a pair of proteins called REV-ERB.

SR9009, as I’ve mentioned above, is a REV-ERB agonist. It connects to the substance and makes it more effective:

All processes under REV-ERB’s control a major boost. Your circadian rhythm alters for a short period. Mitochondria in the cells all over your body start to grow and give you better oxidation. Besides, «old» ones get a slightly prolonged life, and «new» ones grow faster. The primary practical outcome is simple:

More endurance. Sounds great even by now, but there’s much more to come.

I could as well name this part «REV-ERB benefits» because the only function of Stenabolic is to boost this exact substance. So, this is what you can get practically:

Dubbed by some experts as «exercise in a bottle», SR9009 has a triple approach to your endurance improvement. In medical terms, Stenabolic:

Every aspect of energy production, use, and consumption in your body gets a boost. As a practical outcome, you can:

Make sure that your joints and tendons are ready for it. No compound can insure you from getting muscle cramps and damaging your knees.

The compound was proven to be an effective fat melter in multiple studies, like this one or another one here. SR9009 alters your metabolism itself:

A complex cascade reaction makes your body leaner, and the best part of it – you don’t even need to do anything to get the result. You can get a slight decrease in body fat even if you sit on your ass all day and munch on cheeseburgers only. SR9009 sabotages fat tissue growth at the very beginning of the process on a biological level.

Of course, since you also get extra endurance, it would be just dumb to sit around and waste the Stenabolic effects. Not quite an athletic approach. Extensive endurance exercises and a proper diet on cycle can give you a way more notable result.

As if weight loss and extra second breath were not enough, SR9009 can give you positive effects in general health. In medical terms, Stenabolic:

SR9009 is, technically, side effects-free. It sounds like any athlete’s dream, but the reason is not so encouraging: we most likely just don’t know about them yet.

There are no human studies to form the safety profile of SR9009. Until we have a safety profile, the compound can’t be taken as harmless. More like the opposite.

According to anecdotal reports, no real side effects occur in the majority of athletes. Some of them mention a few things, though:

All of it seems to be not that dangerous, but you should take one more thing to account: the reason for SR9009’s so-called «safety» is – possibly – the low bioavailability. Athletes that report no side effects might just take insufficient doses to get any of them.

Wonder why such a great, side effects-free compound is not on the top of the gear list? Well, because it’s almost useless in a traditional oral form.

Before the compound can start acting, it should reach the target area in your body. It should survive the digestive system, pass through the liver filter, go to your blood, and circulate in your blood flow for a while. Classic oral compounds steroids are heavily armored with additional alkylation or methylation to survive all of this. SR9009 is not. Besides, it has a complicated, fragile structure.

Only about 2-3% of your oral SR9009 dose give you any effects. The majority of it dissolves in your body.

That’s like living in a country where you pay 97$ of taxes for every 100$ earned, and it just goes for nothing. Yes, your body is one wasteful system.

Few moments to highlight here to make the situation less grim, though:

As you can see, the situation is not that bad. Besides, there are multiple ways to get more out of every dose.

If you want to get the full-scale fat-burning and energy-boosting effects, take SR9009 in injectable form. It’s a bit harder to find than the oral one, but it’s worth it. Even in said mice studies, intravenous injections were proven to give 100% of the effect.

Be extremely careful with the injectable stuff. Ensure that you trust the source, disinfect everything around you properly, use the right needle, and know what you are doing in general.

Injections scare most of the bodybuilding community off, so injectable SR9009 is not that popular. Most of the substance on the market is oral and comes either in pills or in drops. I’d recommend sticking with pills, so you can try to cheat the low bioavailability with a simple trick:

Take it sublingually – literally, put it under your tongue and let it dissolve there for a few seconds.

This administration route is mostly reserved for conventional prescription drugs precisely because we know that it’s more effective. It’s been proven multiple times in studies like this one.

Keep in mind that there are no studies on SR9009 sublingual administration, and I wouldn’t expect it in the nearest future. Anecdotally, it’s an effective way to boost the cycle a little. However, we don’t know for sure whether the athletes were on real SR9009 or not. It can be a placebo effect, as well. Anyway, unless you’re going to inject Stenabolic, that’s the only somewhat-effective way to get more from every pill.

It’s a tough question since we have no hard data on the half-life. Some sources claim that it stays active for 12 hours. Others mention just 4-6 hours.

Take it either 2 or 3 times a day. Break your dose into equal parts and start with 2 administrations. If it doesn’t work or gives an insufficient effect, switch to 3 administrations.

It’s a short-acting compound anyway, so a single administration a day would not be sufficient. Also, don’t take it within one hour before or after a meal. We don’t have any proofs, but the compound may be just reactive to specific fats in your food and break down on contact. Don’t lower the already low bioavailability any further.

I know that «low bioavailability» sounds like a direct instruction to take more and hope that at least some of the substance will reach the target area. Sounds logical, but doesn’t work at all.

According to anecdotal reports, most athletes start as low as 10mg ED, simply because the compound can be effective even in extremely low doses. The absolute majority, unfortunately, doesn’t fuck around and start with 40mg since all the bioavailability warnings are so widespread.

I’d recommend investing a little part of your time into risk prevention and start as low as possible. Yes, you’re most likely to waste the first couple of weeks of the cycle for nothing, but it’s much safer to get the side effects of a low dose and watch them develop in a dose-dependant way than getting all at once.

Remember that we don’t have any official data on SR9009 dosage for humans since no studies were ever conducted.

Do you have a recommended dosage of cat food for humans? Well, you don’t have one of Stenabolic for the same reason – it was not meant to be taken by humans.

All the numbers are anecdotal, so you have to look for your personal sweet spot.

Most athletes take it in a limited cycle of about 8 weeks since that’s when the compound seems to peak in. Of course, you can take less – or more. Just pay extra attention to your health and mental state – nobody can guarantee the outcome and risks. A good first solo cycle of SR9009 would look like this:

Yup, it’s that simple. Works both with the oral and injectable forms. Injectable one just has a higher chance to give you any effects. The good news is, SR9009 is not suppressive at all, so you don’t need PCT after a solo cycle.

Given that SR9009 is a cutting compound, you can stack it with other cutters to further boost the effect. Best stack options are:

Note that we’re talking about real SARMs, which can affect your cholesterol, BP and definitely will suppress your testosterone. If you take SR9009 with anything else, you NEED PCT.

We’re talking about a rare and novel compound. It would be weird if you could buy it on every corner, right? Well, in the modern market, you can. With just one tiny detail: In the exception of maybe 3 or 4 trustworthy shops, it’s all different compounds, labeled as SR9009.

The easiest way to spot a fake SR9009 is to look for unusual side effects. Real SR9009 is:

Go for your blood works, pay attention to the slightest health and mood changes, and keep track of your cycle. In case you get any typical SARM-like or steroid-like side effects from it, you’re probably on something else.

There is another outcome, though: you’ll go for a full cycle of your SR9009 in question, won’t notice a single strange side effect, but won’t notice any positive ones as well. In that case, you’re either on total bunk stuff or just respond poorly to the real compound in this situation. Why would you give it another try anyway? You’re not Sherlock, and «is my SR90009 real» is not the mystery of the century. Throw the useless stuff away and get your workout boost from anything else.

We’re talking about an experimental substance, synthesized for research purposes only, be nearly-mad scientists, in sterile conditions of a research institute. If it was not effective, I doubt anyone would even think about running it in the first place. How insane one has to be to take something that alters your body’s core processes and has only been tested on mice before?

Luckily, with SR9009, it’s way easier to mess up the cycle and don’t feel any effects at all than to damage your health. Use all the tips and tricks from the article to cheat the low bioavailability problem and see whether it works or not for yourself. In case you find a way to make it effective – extreme endurance and effortless fat loss will worth the risk. In case you find it to be useless – there are numerous other options. More conventional and boring, but probably more effective.

YK-11 Mystery In a SARM World – Cycles, Stacks, Dosage and Side Effects