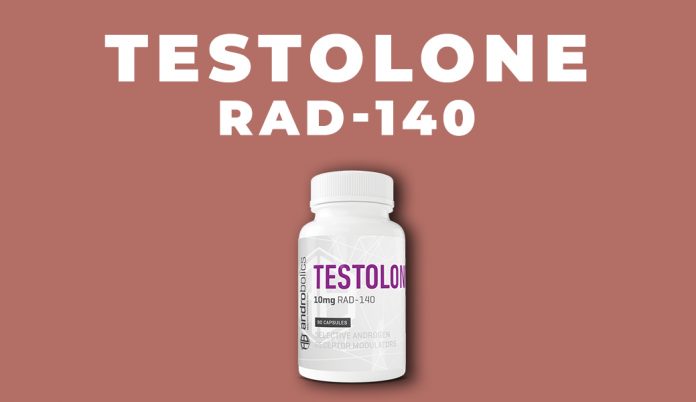 RAD-140 is a classic bulking SARM. It’s often referred to as the non-steroidal Testosterone in a pill, and the market name Testolone just adds to the confusion. While it’s probably a rare example of single-purpose bulking SARM, it still has a ton of difference from the King of steroids – both positive and negative. Here they are – and how to get the best of RAD-140.

The compound belongs to the class of Selective Androgenic Receptor Modulators. These are non-steroidal performance boosters that attach to a LIMITED number of your androgenic receptors in a specific body area (muscles) and stimulate muscle growth. While anabolic steroids cause all kinds of effects in all parts of your body, SARMs act selectively and don’t mess up your hormonal levels at all.

SARMs are generally weaker than AAS, but it’s not the case with RAD-140. Testolone was developed precisely to replace Testosterone in the future of TRT (Testosterone Replacement Therapy) itself.

First of all, comparing these two substances FOR REAL is just as ridiculous as comparing Donald Trump to Donald Duck. The names sound the same, but these are two completely different guys. RAD-140 Testolone and Testosterone can genuinely compete in just one aspect: anabolic activity, aka muscle building potential.

As you know, Testosterone is the golden standard of modern performance enhancement compounds. It’s 100% anabolic and 100% androgenic – with a 100:100 ratio.

RAD-140 has an outstanding (for a SARM) anabolic-androgenic ratio of about 90:1. You can roughly translate the numbers to «Almost as strong in muscle growth boost as Testosterone but zero to none androgenic side effects». Even though these numbers are approximate, it’s still a great power.

That’s why the marketing guys deserve a round of applause – they clearly knew what they were doing. Testolone is a unique case when the wordplay is justified.

RAD-140 has no second trait, no other purpose, but pure bulking. You either use it for mass growth, or you cycle something else, because making you big is where Testolone shines best.

Of course, it’s all individual, it’s not a dry muscle mass, and we’re talking about monkey trials. However, it’s still an outstandingly rapid growth in a relatively short term.

You can make your skeleton pretty happy on RAD-140 – and it’s been medically proven by studies, like this one. Even though the compound was never made for people with bone structure issues (like osteoporosis), you can get some practical benefits from it:

No SARMs were developed with your biceps size in mind. RAD-140 was invented as a revolution of testosterone replacement therapy. No, blasting 750mg of Testosterone Enanthate is not a TRT. It’s madness. TRT is a medical thing, more of a treatment for multiple hormonal diseases and disorders, that men tend to get with age. That’s why, in addition to making you massive, RAD-140 will also:

These were all the effects we can prove clinically. However, the anecdotal experience of hundreds of athletes worldwide says that there’s more to the compound. In addition to all the nice things above and crazy bulking, you may – or may not (we can’t trust the reports for 100%) also get:

Sounds good, but hardly works with everyone. Anyway, extreme bulking is STILL the primary benefit of RAD-140 and the one you should pay the most attention to. Now – to the practical part of it.

In early-stage trials, patients (post-menopausal women, not athletes) were given up to 150mg of RAD-140. The target was to set dosage frames and find the exact spot where side effects would take over the benefits.

The point of no return is 100mg per day.

That’s the top for a human being. Some gym monsters cycle up to 150mg, but it’s a questionable thing. In doses over 100mg, you start losing the anabolic effect, while risks of severe cardiovascular side effects start to grow. At least, that’s what medical data tells us.

In bodybuilding (where you rarely see post-menopausal women), the most popular doses are between 20 and 100mg. In these frames, you don’t get extreme BP spikes with blurred vision in the process. Given the extreme anabolic potential, I would even say that the absolute majority of athletes rarely go over 30mg ED.

Find your sweet spot between 20 and 100mg every day through experiments from low to high, and don’t listen to anyone. Nobody knows what’s best for YOU, except yourself.

The compound is oral. It comes in pills. You know what to do with pills.

RAD-140 oral form’s best thing is that you don’t need injections, and STILL get excellent bioavailability. Practically, all the active substance reaches the target, as we know from the preclinical characterization.

The substance has a half-life of about 60 hours, and in some cases – it can be extended to over 5 days. It does NOT mean that you need a unique protocol for Testolone. The everyday scheme is still the best. This way, you smooth all the positive and harmful effects.

Yes, even though it’s not steroidal, you need serious post-cycle therapy after RAD-140.

Nolvadex or Clomid in medium dosage, up to 40mg per day, is a primary choice for most, since the regular 20mg ED won’t work for everyone.

It would help if you had longer PCT as well – aim at 4 weeks, and lower the dose to 20mg in the last two. This s not necessary, and the regular 2 weeks 20mg Nolva can work for you just as good. It all depends on the personal response. Just keep in mind that you need a bit more, and adjust the PCT for your comfort.

The good thing is, you don’t need to wait for a day to start the PCT. Just hop on Nolva right on the next day of your last RAD-140 pill.

A couple of weeks break between is also important. Don’t be a dick to your body and give it a little rest.

RAD-140 is a pure bulker, so I’ll give you a bulking cycle first.

This is what the protocol would look like. You can take it as it is, or adjust it to your personal preferences:

Quite obviously, you can run a 100mg ED dose if the numbers in the table don’t work for you. You can shorten – or prolong – the cycle itself by a couple of weeks, and lower the Nolva dose as well.

There is no such thing. If you want cutting and fat-melting effects, switch to Cardarine. Utilizing such a potent mass growth compound for cutting and framing it with a calorie deficit is like paying a hooker for hugs, going to rehab for parties, or riding a bike with your hands on the pedals. It will probably work, but you look retarded in the process, and the result could be way better if you used things right.

Given that it’s a bulker, the best compounds for a stack are potent on the anabolic side as well:

You can run two compounds at a time and get excellent results. For example, this is a RAD-140 and MK-677 stack with MK-677 Ibutamoren:

MK-677 is a growth hormone promotant, closer by its mechanism of action to peptides, instead of SARMs. You don’t need a PCT after MK-677. However, you NEED it after RAD140, so, for the sake of the size of your own balls, don’t skip the thing.

As humans, we are curious by nature. So, the question «What if I stack 3 of the most compounds of the class together» was just a matter of time. The answer is – extreme visual blow up and body transformation in one cycle. Here is how the said stack would look like:

In a stack like that, keep doses of each compound low. Possibly – even lower than they are given in the table, and be sure to KNOW how your body reacts to each of them separately.

You need some experience under your belt to avoid situations when you have to drop the whole cycle, unable to identify, which of the compounds gives you nightmares and 16-hours-long erections. Spoiler alert: it’s most likely not RAD-140.

Oh boy, there are plenty, but not all of them are obvious. Let’s take a closer look, one by one.

In medical terms, inflammation means that metabolism in some parts of your body has gone wrong, and now the tissue is destroying itself. It gets red, gets swollen, and basically dies.

Sounds scary, and you don’t want your heart to be even in the same sentence with this? Well, unfortunately, this study puts the two together.

While it’s probably the most quoted study on RAD-140 on all bodybuilding forums, it has some issues:

What can you do about it? Stay in healthy frames and don’t exceed the 100mg daily dose. Maybe, don’t exceed over the 50mg as well, if it works for you. Extra attention to your heart during the cycle would be nice as well.

One of the most notable side effect, because, like… you literally can’t unsee it. The effect is likely linked to intraocular pressure changes, but we have insufficient medical data on the subject. According to anecdotal reports, Testolone can cause:

Luckily, all of it disappears when you finish the cycle, and rarely manifests in the first hand. The only thing you can do is lower your dose significantly. If it doesn’t work or makes the cycle useless, just drop the whole thing and switch to a different SARM – we have no 100% working means of combating this side effect.

Just don’t switch to S4, aka Andarine – it’s the most «vision fuckery»-famous SARM. It will add a bright yellow tint to every blurry and shaky detail of the world in front of your eyes.

RAD-140 is not precisely «fury in a pill», but for some athletes – somehow – it’s an aggression trigger. Many even say that it’s the most «aggressive» SARM of all. Unfortunately, something tells me that we’ll surely never get a full-scale study on that.

Here are other notable side effects that were mentioned in multiple anecdotal reports, but weren’t proven clinically:

You will not necessarily get any of them, but you’ve got to be prepared anyway. RAD-140 is still under massive control and in the center of many studies. For example, this one from January 2020 suggests that it’s liver toxic. If you decide to cycle Testolone, make sure to at least Google it first – new crucial studies can appear at any moment, and the situation will remain uncertain for years.

The only personal opinion you are officially allowed to have on RAD-140 is «Don’t even think about cycling RAD-140! It’s NOT approved for humans! It’s STILL in trials! It’s dangerous!». Yes, that’s the only opinion that Health Canada (and FDA) would appreciate. While all the statements are not far from true, this approach is too far from reality. The substance is already on the market, it’s already popular as hell, and there’s pretty much nothing you can do about it.

As for me, RAD-140 is worth giving it a try, but your head should stay cold all the time, and the control of your health and the situation, in general, should be on top alert. Like, not a single little tingling should be left without attention. You can relax a bit only after you jump off the cycle, run a proper PCT, and keep clean for a few weeks. In my opinion, that’s the only way one should act to get all the outstanding benefits of RAD-140 and stay safe.