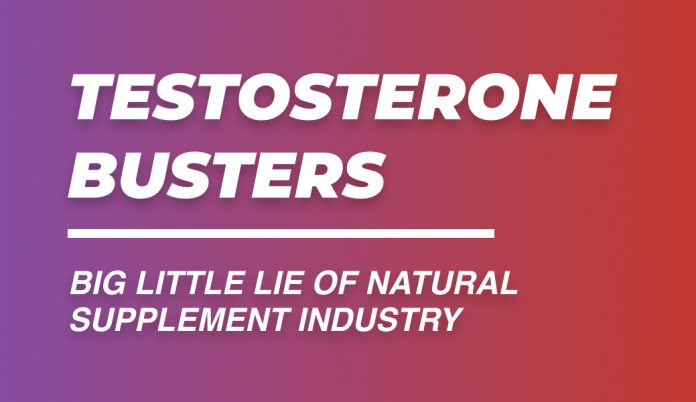 Testosterone Boosters – All You Need To Know

So, do testosterone boosters work?

Their primary effect is just… not doing shit.

Yes, the short answer to your question is simple: Testo Boosters don’t do shit. They can damage your health, though.

And now, since I’ve said the word ‘shit’ twice already, we will calm down and justify these claims. Let’s start from the very beginning.

What Are Testosterone Boosters

There’s no way you haven’t seen at least one in your life. It is usually a huge plastic jar, painted in either screaming toxic MANLY colors, edgy graphics, or – the opposite – white label with a strict, plain text. Everything looks so SCIENCE that you don’t even doubt that it’s a legit thing.

After all, we’re in 2021 – there SHOULD be compounds that would boost your Testosterone, right?

Each package of Testo-Boost 3000 SUPRABULK claims that you will get higher, enormous, crazy levels of Testosterone in just a week, or – sometimes – even days or hours.

Most often, testo boosters contain up to 50 «natural» herbs and substances. Sometimes they call them ELITE herbs or PREMIUM herbs like we’re back in East India Company’s colonial era, and a gram of saffron would cost you a house or two.

What are these herbs? They can be literally anything that gained a reputation of a HEALTHY thing in recent years. A modern Testosterone Boosters most probably contains:

The list can go on and on because they come up with new ideas every month or so.

IN THEORY, some of these substances are PROVEN to raise your natural testosterone production levels.

However, PRACTICALLY, most of them will not make any real difference – the effect is limited, and it’s not enough for anyone to notice.

That’s why they add some other compounds that make you FEEL like your Testosterone is through the roof. Male sex hormones are mostly associated with high energy, self-confidence, and so on, so a typical TestoBooster 5000 MAXXX will also contain one of these guys:

That’s pretty much how the industry works. Also, don’t forget that they make BILLIONS each year and rain real fitness stars with money for promoting their useless stuff.

Are there no studies to prove Testosterone Boosters worthless? Yup, there’s a whole bucket of them. Unfortunately, it’s not enough to push them off the market.

By the way: are you sure you need to care about your Testosterone levels at all? Here’s a guide on how to check your natural high Testosterone signs.

Why Testosterone Boosters Do Not Work

In short, because they’re not even supposed to.

Here’s a beautiful and complex study from 2019 that shows how some Testosterone Boosters even LOWER your natural Testosterone instead of elevating the levels. These guys took the 50 most popular Testo Boosters from the Internet and checked their ingredients.

The result is simple: half of all the ELITE herbs that are supposed to «MAKE YOU STRONGER» actually suppress your natural testosterone production.

The list of typical «Testo Boosters» that work the opposite way and affect your hormonal system negatively:

We don’t live in the stone age anymore, so all the info on these compounds is open to the public. Yes, the first couple of Google results will be BS promotion articles, but you can easily find all proofs if you dive a little deeper. Let’s check the first three on the list:

I can do it all day (and probably will in future articles), but we’ve got other subjects to cover. I hope you get the point: the devil is in the details.

Jokes aside, this is where the situation gets worse.

Here’s a study from 2013 that covers 5 cases of liver injuries in active-duty soldiers. All of them – associated with «Testosterone Supplements» use. They wanted gains but got periportal fibrosis.

Fast forward five years later, to 2018. In this study, Testosterone Boosters, again, are proven to be the cause of a liver injury.

Here’s a short version of the whole thing: dude was munching on some kind of MegaBoost-666 PRO and got severe abdominal pain. He was rushed to the hospital, and they diagnosed a nasty liver injury. AST-ALT indicators were through the roof. He was in a hospital bed for a week.

The repetitive detail in these 2 cases is the compound’s actual name: Universal Nutrition Animal Stak. How did the company react to these studies? Zero attention. Do they still sell their dangerous crap 3 years later? Yup, they do. And they’ve made $43 Million in revenue last year.

Those are just the cases that got thoroughly studied and received all the medical attention. This compound is just an example, but it shows you how the Testosterone Boosters market works.

Before we proceed – the risk is not worth it if you don’t have reasons to worry. The only way to be sure is proper blood work. Here’s our guide on how to get testosterone levels tests in males in Canada.

So far, we’ve been super-negative. It’s not THAT bad, and the world HAS actual testosterone boosters. You just need to know how to deal with them.

Here’s the list of compounds that raise your Testosterone:

You can tell me that these compounds are also contained in shady Testosterone Boosters, and you’ll be right. However, a few things matter here:

When you get a shampoo with a Vanilla extract (or Baobab oil, or Quinoa extract, or whatever), one bottle of that shampoo contains just a tiny trace of the advertised ingredient and a ton of cheaper elements. It works the same way with Testosterone Boosters.

If you eat the whole pack in a day – you still won’t get the effect. You will get an overdose, and your liver will get a deathwish.

To use any of these supplements – you need to take them in separate courses, in real medicine, and most importantly – only when your doc will tell you, «Yeah, you can benefit from it now».

Nah, we’re not going to end it on a positive note. It would be too generous for them. Testo Boosters have one more major feature – nasty sides.

Some of them have side effects by themselves, including:

To combat most of these effects, you will have to take a ton of ancillaries, which makes the whole idea pretty dumb:

And that’s not even the full problem. It’s much worse:

Secret Components Of Testo Boosters – And Side EFfects

Testosterone Boosters, sometimes, just forget to label ALL the ingredients on the package.

You think that your Insanity-1500 EXTRA BULK has just 15 somewhat-natural and relatively harmless herbs, but in fact – it contains some experimental SARM or peptides.

Hey, nothing’s wrong with these two. You can check our full guide on SARMs, their classes, benefits, side effects, and problems. SARMs are OK, but you have to KNOW that you’re on SARMs. You may need PCT, and you need to control your bloodwork, monitor the red flags, and so on.

Here’s an example. This is «MYO-CARD». You recognize the pack style, right?

Even though it shows you the real compound, Cardarine, on the side, it’s labeled as «DIETARY SUPPLEMENT – ULTIMATE ENDURANCE ENHANCER».

Yeah, Cardarine is a good endurance booster, and here you can even check our guide on it, but for the love of God – it’s NOT a dietary supplement.

Cardarine (aka GW501516) is a PPAR-Delta agonist, a WADA-banned professional performance enhancement gear that directly affects your hormonal system. It was developed by Ligand Pharmaceuticals, the company behind Ligandrol (aka LGD-4033 SARM) and other similar compounds. It doesn’t belong to the same class as God damn psyllium husk.

Sounds creepy enough? But wait, there’s more. On the official Health Canada website, you can find a pretty long list of compounds that turned out to be something… say, different.

Here are the most notable ones:

The list can go on, but you probably get the concept. If you want to sell people some dangerous stuff – just label it as a dietary supplement or a Testosterone Booster, forget to put all the «herbs» on the pack, and enjoy your profits.

Just in case you still have any questions – here are all the details on each of the most popular ones.

Nope. You won’t feel it.

Do testosterone Boosters Make You Stronger?

Do Testosterone Boosters Give You Muscle?

I shit you not, they don’t.

Do Testosterone Boosters Improve Your Hormones?

With all that taken to account, I hope you understand that the best way to put it shortly at the beginning of the article was «Testo Boosters don’t do shit. They can damage your health».