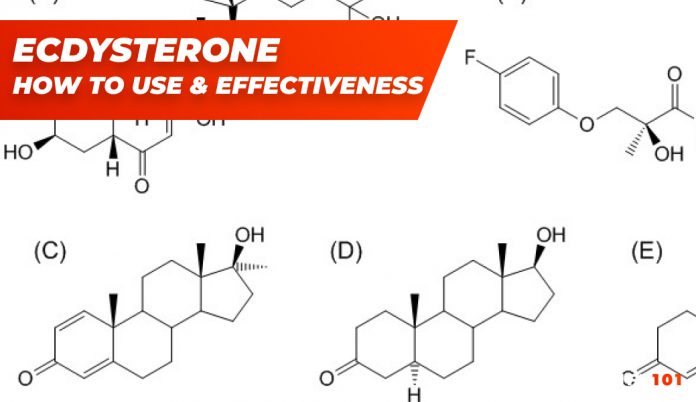 Ecdysterone is a natural substance with hormone-like properties that controls molting and metamorphosis in arthropods in bodybuilding.

There is also phytoecdysterone, which can be found in certain plants, like Cyanotis vaga, Maral root, Yuppie, Suma, etc. As scientists say, its function in plants is to suppress the reproduction of pest insects.

Ecdysterone has a biological effect on humans, but the issue is still a subject of debate. Most ecdysterone supplements nowadays are made from Cyanotis vega and Maral root plants.

It was first studied by Soviet scientists in 1976 like pretty much every other anabolic steroid, revealing its ability to enhance protein synthesis and its anabolic activity. Then, a similar study was conducted in 1988. The comparison of the anabolic activity of methandrostenolone and ecdysterone has shown ecdysterone having a higher activity on the synthesis of contractile proteins than that of the methandrostenolone.

The studies on Japanese quails and rats have illustrated that this substance indeed has a prominent anabolic activity. Based on these results, it was assumed that a similar effect might take place in humans. In 1998, a Russian scientist assessed the effectiveness of the supplement combined with a protein diet. The results showed that subjects on average gained 6-7% of lean muscle mass and reduced body fat by 10%. It has also been discovered that ecdysterone helps lower blood glucose without affecting insulin levels. Sugar level decreased when, before intake, it was normal and slightly increased (up to 16 mmol/l), the high level did not change. Thus, it makes it possible to use it in people with type II diabetes.

Some other studies have shown the presence of ecdysterone of adaptogen, antioxidant, and anti-tumor properties.

The effects of this supplement include:

Researchers who studied ecdysterone concluded that under the influence of ecdysterone, muscle anabolism rises by 190-200%, which is comparable to methandrostenolone injections. The action of the substance, as scientists claim, is in the stimulation of protein synthesis in the cytoplasm of muscle cells. The acceleration of the synthesis of protein chains from amino acids takes place. It is considered that ecdysterone increases the concentration of potassium and calcium ions inside muscle cells, and this causes an increase in the synthesis of DNA, RNA, and protein.

As for the side effects, it has none and has a lot of beneficial ones. It does not allow cortisol to destroy cells. It normalizes the synthesis of creatine, increases the heart’s adaptive abilities, and improves liver function and blood composition. Surprisingly enough, but it, being a powerful anabolic, does not inhibit the body’s secretion of testosterone. The same can be said about the growth hormone. Those who have been administering steroids for a long time are usually forced to make growth hormone injections. Simultaneously, even long-term use of this supplement not only does not weaken the natural production of the growth hormone but also increases it. Unlike steroids, as sports doctors claim, it is recommended to be taken in a dose of 30-50 mg daily. However, the dose can be increased up to 100 mg per day without any complications or side effects.

As for today, there is currently no reliable proof on the effectiveness of ecdysterone-containing supplements, safe for the information provided by Russian scientists in the previous century. Unfortunately, all the gathered research data is not statistically reliable. Conducted experiments that gave the data do not meet modern requirements, like the presence of a control group, randomization, etc. Also, most of the studies were conducted on animals.

IIn 2006, an independent study was conducted, in which athletes took ecdysterone and performed physical activity. The results of the study showed that it does not affect muscle growth and does not increase strength and endurance.

In 2008, Hungarian scientists conducted a new study. It showed that ecdysterone is able to influence the number of satellite cells, the basis for the formation of new muscle cells. Still, these results cannot be fully extrapolated on humans, since this study was conducted with mice as test subjects. So, the data received in the experiment of 2006 is not refuted.

One should pay attention to the dose of the substance. In all studies with positive results, the doses of ecdysterone were equivalent to 500 mg daily for humans. However, most ecdysterone supplements present on the market contain significantly smaller doses that usually do not exceed 20 mg. If you see that the dose is below 100 mg, then this supplement is entirely useless. Recently, new supplements with supposedly more effective dosages have appeared (like EcdySterone from SciFit – 300 mg, SyntraEC from Syntrax – 275 mg, etc.)

Most manufacturers recommend taking supplements after meals or before training.

Side Effects And Possible Harm

Ecdysterone is a natural non-hormonal substance. It does not affect the metabolism of human sex hormones. The substance does not cause side effects typical of anabolic steroids, as it works differently.

Ecdysterone is not harmful to the body in any doses (even if it’s about several grams of a pure substance). Some people use ecdysterone in doses of more than 1000 mg daily and do not experience any unpleasant side effects. Nonetheless, doctors do not recommend exceeding a maximum of 800 mg per day dosage.

Combination with other supplements

As was previously noted, ecdysterone has a much more pronounced effect when used in conjunction with protein. It is recommended to the substance together with gainers or protein supplements of any kind. Besides, the intake of vitamin and mineral additives is also advisable, since anabolic processes require an increased amount of these substances. To increase strength and muscle growth, you can add products with creatine and Tribulus terrestris to the complex. To catalyze the effects of ecdysterone further, you may introduce creatine and Tribulus terrestris supplements to your diet.