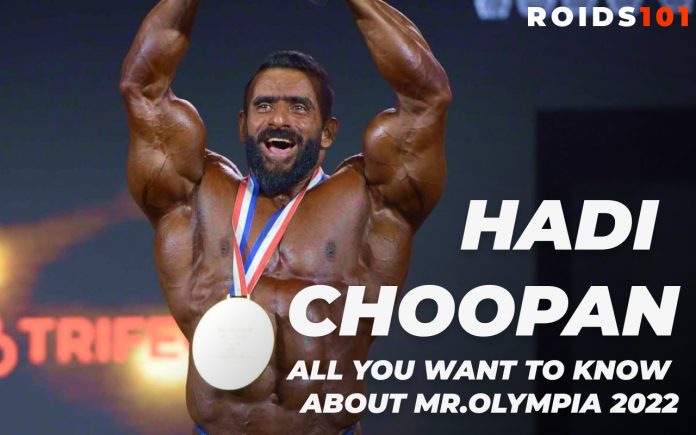 Hadi Choopan is the new Mr Olympia. The Persian Wolf took Big Ramy’s throne, and we believe his victory is well-deserved. Now, what about the Hadi Choopan steroid cycle? Do we know what it takes to become Mr.Olympia?

There are speculations, and even though they have some basis — no, we’ll never learn what he used. Because the ancient deities would not approve of it.

Here’s what literal Gods have to do with Mr.Olympia 2022 and his steroid cycle.

What We Know About Hadi Choopan — The Basics

First of all — this is how EXACTLY massive you have to be to win Mr.Olympia:

A few more facts you need to know:

So we have a self-made PRO bodybuilder with big ambitions, who knows what’s at stake, and has quite a background. And there’s more.

Even though some of them are «Ms. Figure Olympia», «202 Olympia» and alike — here’s a list of people he coached that you probably know:

Now Hany has another Mr.Olympia on his list — Hadi Choopan — and we’ll see if he’ll make the Persian Wolf 4-times champion (like Jay Cutler) or will go for 7 times (like Phil Heath).

So… Did Hadi Choopan Take Steroids?

SPOILER ALERT: He never mentioned his real cycle, never admitted openly to taking steroids, and all we have here is mere speculations.

With this spoiler in mind — what causes all the buzz about Hadi and gear? We believe that 3 clear reasons are defining the public opinion now:

We can list more serious reasons to believe he did, though:

The fact that steroids are really easy to get in Iran. Some are available at pharmacies all around the country. Or the fact that Iranian athletes were banned for steroid use before (like Mostafa Khademi and Hossein Jahangiri in 2012, Kia Afzali or Hossein Saveh Shemshaki earlier in 2022), and other stuff.

The fact that almost all Hany’s guys were quite open about their steroid use:

Now the public has a few facts to support the intuition: Hadi could easily get steroids in Iran, and had a good company — pretty familiar with the gear world. There’s more meat to this argument than to the “just look at this guy” one.

Now to the weird part. Every time a new Mr.Olympia gold medalist is announced, we have tons of versions about their exact steroid cycle. That’s just how Internet works. This year we have two notable examples:

Both are… quite questionable.

No Reason to Believe The Alleged Versions

First of all — because the authors themselves, in bold and all caps, say that these protocols are merely a speculation. Evolutionary gives a huge disclaimer at the end of the article:

Gorillaz also say that Hadi never spoke openly on doping, and call their example «what we THINK his steroid cycle COULD look like».

Articles like these are really «entertainment-only» because most of them lack research and aren’t updated often enough.

For example, here Gorillaz say that Jay Cutler’s cycle (with no disclaimers) looked like this:

But Jay Cutler actually talked about his real steroid use in a recent interview with Greg Doucette (that we have zero reasons not to trust).

The alleged cycle looks close enough to the truth, but is still quite different from the real one, as revealed later. Especially in terms of dosage.

Neither Evolutionary or Gorillaz are to blame though, they have their disclaimers in place, but it should be clear that there’s absolutely no reason to believe that the “Hadi Choopan steroid cycle” you can take from the Internet is rooted in reality.

Why We Will Never Learn The Real Hadi Choopan Steroid Cycle?

The answer is — because of the ancient religion, Zoroastrianism. And because politics.

Zoroastrianism is one of the world’s oldest organized faiths, with really complicated cosmology, a whole pantheon of Gods the Christian world barely knows about, and approximately 120.000 worshipers around the world.

Before the competition, Hadi Choopan posted his pic on Instagram and asked Zoroastrian deity for help (sorry for Google translate):

«In the name of Ahura Mazda, my God
Peace be upon Iranians and Iranians in the universe.
All for one and one for all
For the pride of Iran, always proud.
For Iran and Iranians
God, I hope in you»

Ahura Mazda is a Zoroastrian God, and the name means Wise Lord, if we translate it in an oversimplified way.

Some other notable quotes Hadi made after his victory are:

Do you remember any US Mr.Olympia celebrating their medal like this?

Note that this is NOT this year’s Mr.Olympia, it’s his BRONZE medal celebration 3 years ago. Can you imagine what will the celebration look like in Iran when he’ll bring Gold this year?

Perhaps it has to do something with the fact that a simple Iranian guy — as some say, former construction worker — went to the United States amid extreme political tensions between two countries and officially won the most prestigious bodybuilding award in the world — defeating a whole crowd of American athletes in the process.

Now, can you imagine this deeply religious and extremely patriotic guy saying in some interview in ten or so years that it was actually not prayers, but Tren, Dbol, and some Insulin?

Like, literally: «Remember the time I dedicated my victory to 23 years of hard work, my homeland, God, my family, friends, and was greeted like a hero? Lmao, here’s what it really was, write down: 1000mg of Trenbolone…»

It’s just impossible. Not this time, and not with The Persian Wolf with his whole background.

At least so far — Hadi Choopan looks like a wholesome guy who wouldn’t do a dumb move like that. We hope he will keep it as it should be: a secret everyone knows but nobody talks about.

While it does NOT matter, whether Hadi Choopan took steroids or not, there’s still a lot of buzz.

All the time spent on arguing whether someone is natty or not should be spent on extra reps, simply because PRO athletes still work hard AF to get their results, so it doesn’t matter, whether they’re on juice or not. Unless, of course, they blatantly lie about it.

In 2022 it even feels weird that some people still stand on the “work hard and you’ll look like this too” position.

No, you won’t look like Hadi Choopan if you’ll just work out every day for 3-5 years.

And you won’t look like Hadi Choopan if you’ll pin some Testosterone in your butt without years of extensive daily training.

At the same time the only official explanation we will ever get for any Mr.Olympia success is “it’s all because of dedication and hard work”. Add discipline, and these three are actually even more important for an athlete than a good cycle.

We have top-quality steroids in our store that can make pretty much anyone massive AF. But even they won’t do anything if you won’t work hard in the gym like Mr.Olympia PROs.